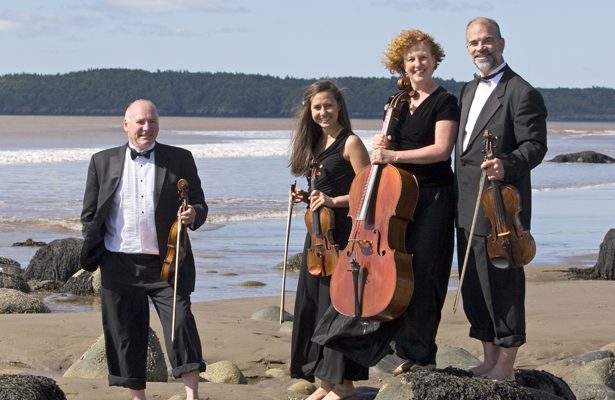 Symphony New Brunswick’s Virtuoso Series kicks off in 2019 with Soundscapes/ Paysages Sonores; a concert designed to warm the hearts and minds of its audience.

With concerts from the 24th to the 27th of January, the Saint John String Quartet will hit the winter roads to bring this sonorous tour to Fredericton, Moncton, and Saint John.
The program is focused on the sounds of Mendelssohn and Debussy as well as the increasingly popular Arvo Pärt, each of whom has approached the ideas of sonority in their own way.

These three very different examples of sonority in the string quartet each demonstrate a passion for the soundscape. Mendelssohn investigates the beauty of the string sounds creatively but within rules of classical form, while Debussy goes straight for the beauty with minimal consideration of the rules; thus doing his bit in developing the new era of music that is now firmly on its way. Arvo Pärt benefits from the breakdown of classical structures but also reaches back in time to juxtapose simple sounds and repeated rhythms on modern sonorities. This concert is very much a concert of soundscapes, with explorations through musical time of the constants and changes.
Concerts are:
Thursday, January 24 McCain Hall STU, Fredericton,19h30
Saturday, January 26 Resurgo Place Resurgo, Moncton,19h30
Sunday, January 27 Saint John Arts Centre, 14h00
Tickets are available at the door for $26/ adults, $10/ students and children under 12 free
Mendelssohn String Quartet Op. 13 in a minor
Pärt Psalom
Debussy String Quartet in g minor Op. 10