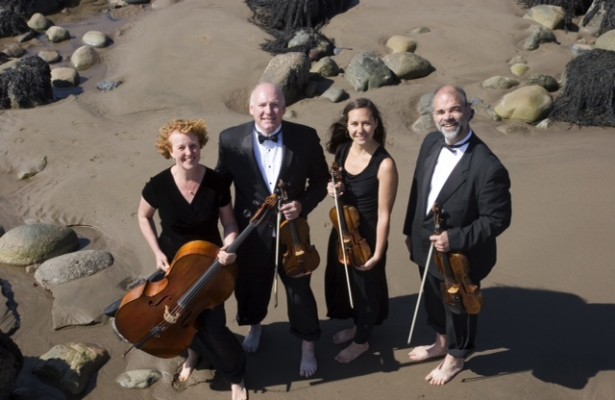 Michael Miller is a composer, pianist and retired professor of music. He emigrated to Canada in 1967 and began teaching piano, composition and theory at Mount Allison University and performing with the Mount Allison Trio. He has composed for voice, choir, piano, organ, guitar, orchestra, band, and various chamber ensembles. His style employs such 20th-century techniques as pandiatonicism, polytonality, modal scales, cross rhythm, serialism and aleatory. His works usually retain identifiable metres and tonal centres.

“Fantasia on themes of Beethoven”, written for the String Quartet in 2004, borrows from three of Beethoven’s most cherished works: the Ninth Symphony, Fidelio and the String Quartet in F, Op.135. Beethoven’s celebrated setting of Schiller’s “Ode to Joy” is presented first over an unusual harmonic foundation. The nine variations that follow transform the theme in surprising ways.

Haydn’s string quartets represent the very pinnacle of this chamber music form. Written in 1790 at the request of Johann Tost, a violinist in Haydn’s court orchestra at Esterhazy, ‘The Lark,’ showcases Haydn at his witty best. Inventive and inspired, it has become one of the most popular of his quartets for musicians and audiences alike.

The earthbound staccato chords of the second violin, viola, and cello at the beginning of the Allegro Moderato are answered by the first violin’s soaring melody from which the quartet gets its nickname. Just as the unexpected development section arrives at its climax the ‘Lark’ theme sails calmly in once more and Haydn ends the movement with a condensed double recapitulation, one of his many musical innovations.

The Adagio Cantabile has a lyrical and expressive melody for the first violin, followed by a somewhat darker middle section in a minor key, before its return once more in ornamented variation. The Menuetto is both rousing and rustic in feel, breaking the listener away from the pensive mood of the previous movement. A chromatic trio in D minor interrupts briefly before paving the way back

to a buoyant return of the original Menuetto theme.

The lively Finale has been likened to the British sailors dance, the Hornpipe, with rushing sixteenth notes passed from instrument to instrument. A fleeting minor-mode fugato section leads to a bustling, yet good natured, conclusion.

String Quartet No.2 dates from 1906 and was premiered to great critical acclaim. The first movement, ‘Andante – Allegro’, begins with a slow, broad rising introduction. It is the most important melodic theme of the entire quartet and serves as its motto-motif. This Andante theme is suddenly interrupted by a brief Allegro burst of energy before an Adagio passage momentarily halts its progress until it is allowed to begin again in earnest.  Particularly striking is the fact that it takes place at a rapid tempo while simultaneously the main theme, the motto, is played at its original slow tempo. It is an extraordinary effect which strikes the listener as if hearing two widely different tempi at once.

The second movement, ‘Presto acciacato’, is a scherzo, opening with a relentless, driving rhythm in the cello. Superimposed periodically on top of this rhythm are warning chords which create a menacing mood of evil. The choral theme of the trio has a simple grace and carries the feel of a pure and innocent prayer.

Although the final movement is marked Molto Adagio, it consists of several other important sections. More accurately it should be entitled ‘Molto Adagio – Animato – Adagio – Andante – Allegro.’ It begins in a hushed mood similar to the trio section of the preceding scherzo. Suddenly there is a powerful, angry outburst as the Animato dramatically explodes full of passion. In the final part of the Animato, we hear for the first time the entire exposition of the opening Adagio powerfully stated by the viola against an ethereal accompaniment in the violins, playing high on their E strings. The dramatic high point is reached towards the end of the Andante with a restatement of the opening motto, the two violins slowly climbing ever higher, the second echoing the first each step of the way. The final measures of the Allegro are hushed and restful, drawing matters to a peaceful conclusion.

Dohnányi was born in Pozsony, Kingdom of Hungary, Austria-Hungary (today Bratislava, capital of Slovakia). He first studied music with his father, a professor of mathematics and an amateur cellist, and then, when he was eight years old, with Carl Forstner, organist at the local cathedral. In 1894, in his seventeenth year, he moved to Budapest and enrolled in the Royal National Hungarian Academy of Music,[2]studying piano with István Thomán and composition with Hans von Koessler, a cousin of Max Reger. István Thomán was a favorite student of Franz Liszt and Hans von Koessler was a devotee of Johannes Brahms music. These two influences played an important role during Dohnányi’s entire life: Liszt in his way of playing piano and Brahms in his compositions.[3] Dohnányi’s first published composition, his Piano Quintet in C minor, earned the approval of Johannes Brahms, who promoted the work in Vienna.

The Hungarian government posthumously awarded him its highest civilian honor, the Kossuth Prize, in 1990. An International Ernst von Dohnányi Festival was held at Florida State University in 2002. (Wikipedia.org)