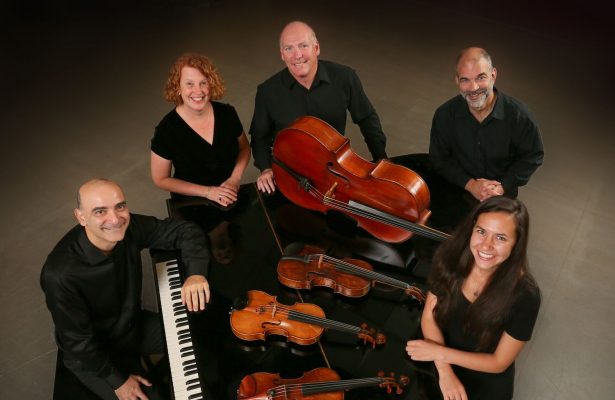 New Brunswick—Symphony New Brunswick recognizes that we all need a break from the wintry weather and will present two fabulous concerts to bring in the spring — “Ventus Machina in Concert” and “Hammers and Strings,” a concert featuring the Saint John String Quartet with guest pianist Martin Kutnowski. These concerts in late March and early April conclude the Virtuoso Series of concerts for the season, leaving two full-symphony Bravo Concerts on the main stages of Moncton, Fredericton, and Saint John throughout April and May.

The well-known woodwind quintet, Ventus Machina, will perform an exciting repertoire of works they have not yet explored in three New Brunswick cities in late March and early April. Stalwarts Karin Aurell (flute), Christie Goodwin (oboe), and Patrick Bolduc (bassoon) will be joined in this concert by Symphony New Brunswick musicians Andrew George (clarinet) and John Fisher (horn). Both hail from Saint John, and Symphony New Brunswick is delighted to welcome them to the stage for these special performances.

The program will be very diverse and will feature the works of composers from the United States, Italy, Brazil, and Hungary, across a broad span of music making: Irving Fine; Nino Rota; Heitor Villa-Lobos; György Ligeti; and Endre Szervánszky. The works of Irving Fine (1914-1962), a member of the Boston School (alongside Aaron Copland and Leonard Bernstein), is noted for its “unusual melodic grace” and its “elegance, style, finish, and convincing continuity.”

Nino Rota (1911-1979) is an Italian composer, pianist, and conductor best known for his film scores, which include works for Fellini, Visconti, and Zeffirelli films. In 1974 Rota won an Academy Award for Best Original Score for The Godfather Part II. Heitor Villa-Lobos (1887-1959) is a Brazilian composer described as “the single most significant creative figure in 20th century Brazilian art music.” He is also undeniably the best-known South American composer of all time. György Ligeti (1923-2006) is a Hungarian composer of classical music, known best for his avant-garde music in addition to the excerpts of his pieces that are part of the film score of 2001: A Space Odyssey. In fact, he was restricted by authorities of communist Hungary and only able to develop his compositional techniques and indulge his passion for new music once he had emigrated to Austria in 1956. Endre Szervánszky (1911-1977) — also a Hungarian composer — studied at the Budapest Academy of Music and has been influenced by Béla Bartok. He was honoured with the “Righteous among the Nations” award by the State of Israel to honour non-Jews who risked their lives to save Jews from the Nazis.

SNB General Manager Jennifer Grant says, “I see a political thread running through these exciting musical selections. We are pleased to be presenting works that might not have been heard by everyone but that will be long remembered after the concert.”

Concert details or Ventus Machina in Concert are as follows:

The beloved Saint John String Quartet will be joined by well-known pianist, composer, and Fine Arts professor Martin Kutnowski, the celebrity who accompanied the String Quartet on their fabulous four-week South American tour this summer.

The program, called “Hammers and Strings/Marteaux et Cordes,” will be reminiscent of their tour, including many of the same fabulous pieces.

Numbers include five original works by Kutnowski as well as works by Mozart, Bloch, and Glazunov. The combination of the beautiful strings of the quartet (two violins, a viola, and a cello) and a piano may answer the debate as to whether the piano is a string instrument or a percussion instrument.

Members of the Saint John String Quartet include David Adams (violin); Danielle Sametz (violin), Christopher Buckley (viola), and Sonja Adams (Cello). Sonja Adams says the Quartet, while equally comfortable on the main stage of concert halls, loves the smaller venues for these Virtuoso concerts: “The audience is very close, so there’s an intimate feel to it and it adds something to our performance as the listener is right with us, experiencing this music. We’re playing on the same level or plane, with the audience only three feet away from us. That makes for a different kind of musical experience. It’s this feeling of closeness that makes chamber music so special.”

Concert details for Hammers and Strings are as follows:

Tickets are available at the door or at the Imperial Theatre for the Saint John concerts and at the door in Fredericton and Sussex. Imperial Theatre: (506) 674-4100, imperialtheatre.nb.ca or contact Symphony New Brunswick to reserve tickets: (506) 634-8379; symphony@nbnet.nb.ca