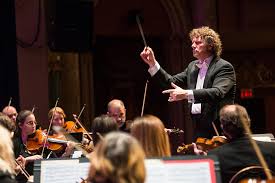 After attending a recent concert by Symphony New Brunswick conducted by Michael Newnham with Philip Thomson playing Shostakovich’s Second Piano Concerto, the well-known artist, Octavio Ribeiro, decided to respond to a donation request in a most artistic manner.

“I attended a memorable concert by Symphony New Brunswick last night. The orchestra has come a long way under the direction of Maestro Michael Newnham and the performance by the brilliant Philip Thomson was outstanding. The Symphony is a precious cultural asset in New Brunswick and I would like to lend it my support in a small way.” Says Ribeiro

Octavio Ribeiro’s painting are being displayed until June 15th as one of the exhibitions organized by Imperial Theatre Exhibition Committee (ITEC) , which since 1994 has been giving gallery space to established and emerging artists with sufficient material. This is Octavio Ribeiro’s second exhibition in the Imperial Theatre, having exhibited very successfully in 2006.

“A plea was made from the stage of the concert for funding contributions” said Ribeiro “and I have decided that I will donate all proceeds from the sale of my paintings at the Imperial to Symphony New Brunswick.”

Ribeiro hopes to see his paintings fly off the walls during the full houses expected with Mamma Mia at the Imperial and hopes that his donation to Symphony New Brunswick will help it maintain its quality and that it will continue to reach into the hearts of New Brunswickers for many years.

Ribeiro’s exhibition is titled “The Studio”. Octavio Ribeiro studied Fine Arts and Education at the West of England College of Art in Bristol, England, and Art History at Carleton University in Ottawa. He has experience of different media but prefers to work in oils and watercolour. His subjects are usually figure and floral studies, interiors, cityscapes, and still life.

He has exhibited in group shows at the Royal West of England Academy, in Bristol, England, at the Ring Gallery, the Trinity Gallery, the Citadel Gallery, the Handworks Gallery, and the Arts Centre all in Saint John and at Gallery 78 in Fredericton.

Octavio Ribeiro’s paintings can be found in collections in Europe, the United States, and Canada, including two paintings in the collection of the late Reuben Cohen who was said to have had the best collection in Atlantic Canada.