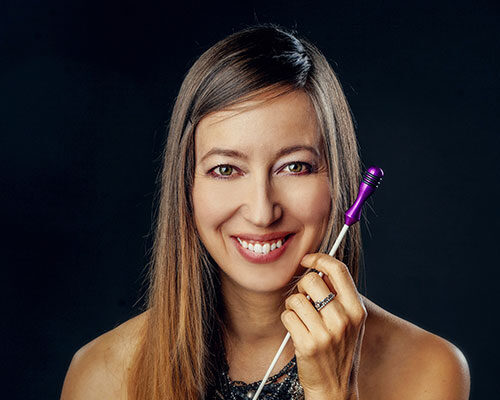 Music Director Mélanie Léonard is pleased to announce details of Symphony New Brunswick’s 2021-2022 season. Due to lingering pandemic concerns, the season will feature a continuation of concerts by Camerata New Brunswick, SNB’s chamber orchestra, although the orchestra will be slightly enlarged for some programs where more diverse instrumentation is required.

Maestra Léonard makes her conducting debut as Music Director October 22-24 in Saint John, Moncton and Fredericton respectively featuring works by Quebec composer Jacques Hétu, Mozart and Schubert. Guest pianist Maxime Bernard will perform the beloved Mozart Piano Concerto no. 21 in C and Camerata will close the concert with Schubert’s Symphony no. 5, a premiere performance by SNB.

In November, Camerata will perform “Galactic Journeys” with guest conductor Lucas Waldin featuring a selection of excerpts from the Star Wars films and other galactic music in arrangements for smaller orchestra. The show will be in Saint John on November 18 at 7:30; Fredericton on November 20 at 7:30 and Moncton November 21 at 2 p.m.

Beethoven’s 250th birthday celebration was delayed by covid; but SNB plans to party anyway on December 18, 20 and 21 in Fredericton, Saint John and Moncton respectively. Martin Beaver, one of Canada’s foremost violinists will join the orchestra to perform Beethoven’s beautiful Violin Concerto. Mélanie will also conduct Beethoven’s lively Symphony no. 4.

In two concerts on March 19th in Fredericton and Saint John and on March 20th in Moncton, Maestra Léonard will be back to conduct “Contrapunctis” or “Music’s Da Vinci Code Revealed”, a program of early to modern music displaying the handiwork of Johann Sebastian Bach and demonstrating how his unique style influenced composers such as Mozart and Shostakovich and Canadian composers Jocelyn Morlock and Louis Babin.

On April 10th through the 12th in Saint John, Moncton and Fredericton Symphony New Brunswick presents “Ad Astra”, a program featuring our rising stars.  We cannot wait to announce our guest conductor, soloists, and impressive emerging artist to be featured.

In May and early June, SNB travels to the northeast of the Province for a pair of concerts before returning to Saint John, Moncton and Fredericton for the season finale. Mélanie leads the orchestra in a program of French compositions with a taste of the Maritimes. Bizet’s two Suites from the opera Carmen will end the concert after works by Gabriel Fauré, Camille Saint-Saëns and New Brunswick’s very own Ludmila Kneskova-Hussey. Concerts will be May 30th in Saint John, June 1st in Moncton and June 2nd in Fredericton.

Tickets will be on sale September 10 at the box offices of the Imperial Theatre, the Playhouse and the Capitol Theatre and can also be purchased online through Symphony New Brunswick’s web site.

Symphony New Brunswick is also pleased to announce the continuation of its popular “Virtuoso Series” in Saint John, Moncton and Fredericton featuring the Saint John String Quartet, ventus Machina and Résonance. Details of the concert programs, dates and venues will be posted on the Symphony website.