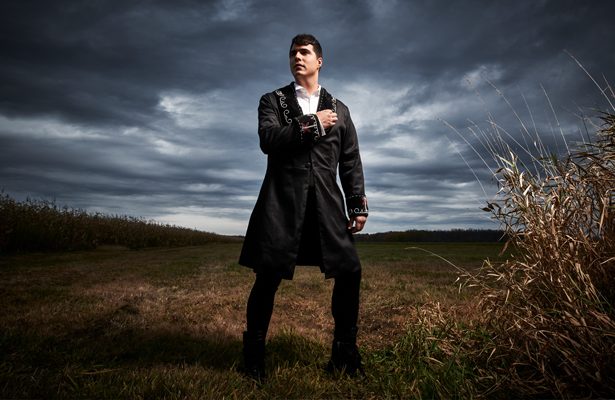 Jeremy Dutcher and Symphony musical collaboration connects cultures and people
On Saturday November 16th Indigenous musician and composer Jeremy Dutcher performed with Symphony at the Imperial Theatre in a collaborative production that brought First Nations music to maritime audiences. Presented in Halifax, Fredericton, Moncton and finally Saint John, the show sold out for all four performances and it wasn’t long before you could see why.
Being a Wolastoqiyik (Maliseet) member of the Tobique First Nation in North-West New Brunswick, Dutcher has endeavored to keep the music of his people alive through musical synthesis of the old and the new. Dutcher is known for this unique layering of Wolastoqiyik songs and his voice, but the experience in person amongst the backdrop of the regal Imperial architecture was truly haunting and soulful.
As Dutcher explained that evening, fewer than one hundred people speak the Wolastoqiyik language fluently anymore. In the early 1900s their songs were captured in wax cylinders by an anthropologist, William Mechling, and stored in archives out of reach from the very people whose culture had produced them. Over 100 years later Jeremy Dutcher, with encouragement from his elder, went on to explore these recordings after completing his training in Western classical music. He has now brought these digitalized recordings into a public sphere with his album Wolastoqiyik Lintuwakonawa (released in April of this year) where those voices sing alongside his powerful voice.
After the success of his album, Dutcher has now collaborated with guest conductor Lucas Waldin to produce a show featuring entirely indigenous music. The performance featured collaborative pieces that utilized Dutcher’s astounding vocal and piano accompaniment, Waldin’s graceful overlay of Symphony instrumentals, and the very recordings Dutcher’s ancestors made long ago. Dutcher spoke of the significance of this as languages often bring with them the perceptions and worldviews of the people that speak them. This endangered language brought an entire world to the audience’s awareness through the transmuting emotions of the music they experienced.
Perhaps this was Dutcher’s secret as the music brought everyone together in that audience. One song performed was called “the great river” and Dutcher explained the significance and beauty of the Wolastoq River in New Brunswick (St. John River) that joins with the ocean to create a significant and powerful swirling energy center. All the audience could understand this song without translation; we all know that river and the energy you feel going over it. The song likewise brought on a great swell of emotion; needless to say tears flowed freely that night.
Along with Lucas Waldin’s wonderful conducting, the harmonization of the orchestra with Dutcher’s songs were transformative; a true collaboration of harmonies and minds. Andrew Miller, Symphony NB’s Principal Bass, noted how this concert affected him as someone who has lived in this area as well: “It meant a lot to me to be doing music about this river that I’ve lived along for 25 years. I know Jeremy’s music has a lot to do with language, but of course he also communicates on a level that goes deeper than any words.”
The show was a balanced mix of performances from symphony NB featuring significant aboriginal artists such as Cries Dirksen, Cathy Elliott, and Buffy Sainte Marie. Dutcher’s performance of “Until it’s time for you to go” by Sainte Marie was inspired and emphatically cherished by the young singer. Dutcher’s sincerity brought a lighthearted and healing energy that was very authentically his own. His playful nature connected with the audience and brought with it an optimism that was hard to resist.
For Dutcher returning to Saint John was particularly significant as many of the songs performed that night were about this area of land by the Wolastoq River. The name Wolastoqiyik actually can mean “people of the river” or “People at the river.” With the current push to re-establish the name of the Saint John River to the Wolastoq River, perhaps this singer’s feelings will resonate in people’s minds when considering that proposal. Dutcher’s efforts to connect all the audience to his truly spiritual and loving feelings about this land were certainly successful as he ended the show by commenting fondly that “if lonely in the spring you may look up the river and you’ll see me coming.”